By richahadmin April 20, 2016 Uncategorized
No Comments 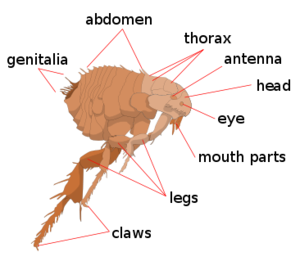 Fleas! Eek!
Fleas are insects that form the order Siphonaptera. They are wingless, with mouthparts adapted for piercing skin and sucking blood. Fleas are external parasites living off the blood of mammals and birds.
Fleas are about 1.5 to 3.3mm long, agile, usually dark colored, with tube-like mouth parts adapted to feeding on the blood of their hosts. Their legs are long, the hind pair will adapted for jumping; a flea can jump vertically up to 7in and horizontally up to 13in, making the flea one of the best jumpers of all known animals (relative to body size). If humans had the jumping power of a flea, a 6ft person could make a jump 295ft long and 160ft high!
Atypical of other insects, fleas do not possess compound eyes but instead have simple eyes with a single biconvex lens. Their eyes are known as “eyespots’. Their bodies are laterally compresses, permitting easy movement through the hairs or feathers on the host’s body. The tough body is able to withstand great pressure, likely an adaptation to survive attempts to eliminate them by mashing or scratching. Even hard squeezing between the fingers is normally insufficient to kill a flea.
Fleas go through 4 lifecycles, egg, larva, pupa and adult. Adult fleas must feed on blood before they can become capable of reproduction. Flea populations are distributed with about 50% eggs, 35% larva, 10% pupa and 5% adults.
Eggs
The fleas life cycle begins when the female lays eggs after feeding. Eggs are laid in batches of up to 20 or so, usually on the host itself, which means that the eggs can easily roll onto the ground. Because if this, areas where the host rests and sleeps become one of the primary habibtats of eggs and developing fleas. Eggs take around 2 days to 2 weeks to hatch.
Larvae
Flea larvae emerge from the eggs to feed on any available organic material such as dead insects, feces, conspecific eggs and vegetable matter. They are blind and avoid sunlight, keeping to dark places such as sand, cracks and crevices, and bedding.
Pupae
Given an adequate supply of feed, larvae pupate and weave silken cocoons within 1-2 weeks after 3 larval stages. After another week or two, the adult fleas are fully developed and ready to emerge. They may remain resting during this period until they receive a signal that a host is near-vibrations, heat, and carbon dioxide are all stimuli indicating the probable presence of a host.
Adults
Once the flea reaches adulthood, its primary goal is to find blood and then to reproduce. Its total life span can be as long as one and one-half years in ideal conditions. Female fleas can lay 5000 or mores eggs over their life, allowing for phenomenal growth rates. Generally speaking, an adult flea only lives for 2-3 months. Optimum temperatures for the flea’s life cycle are 21 C – 30 C and 70% humidity.
Now that you are itchy all over we’d like to let you know that for the month of April we are offering a 15% discount on Advantage topical flea control!

Myths and Dangers of Anesthetic-Free Dentistry

Myths and Dangers of Anesthetic-Free Dentistry